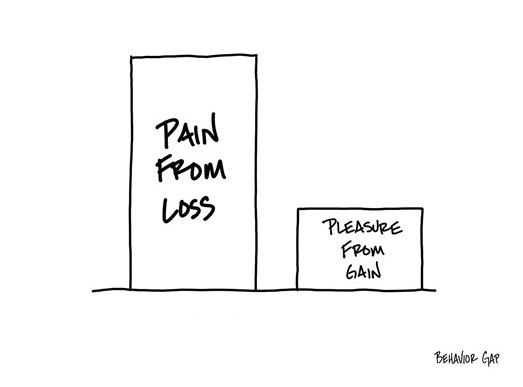 In the coming posts, I’ll be discussing various areas of the above image that very simply explains an important investment behavior- loss aversion.

Most people are wired a certain way.  We are never happy when we lose something.  In fact, we actually feel the pain of a loss much more than we feel the pleasure from a similar sized gain.  Because of this, we try to avoid loss.

In the same breath, though, we are constantly seeking growth, never satisfied with past growth, always looking toward future potential.  As displayed in the image above, any gratification we feel when we look at a year end investment statement with a large gain is short-lived.  Humans tend to have contentment issues, including me.

However, a significant loss can sting greater and for far longer than satisfaction from a similar significant gain.  After a drop in the stock market, we oftentimes consider the possible long term impact of having a smaller account balance.  Worry and fear kick in:  Will I have to work longer than I planned?  Will the income I need to live on be enough with this smaller balance?  Will the stock market ever recover?  People still talk about the market collapse in 2008, but nobody ever brings up the great year we had in 2013.

To prove the concept of loss aversion, I often ask my clients that are around retirement age:

“What would have a greater impact (positive or negative) to you:

Seeing your investment savings double, or seeing it cut in half?”

After a brief pause (where the client is doing some math in their head), the answer I receive, every time, is that they would be more impacted if their investment savings were cut in half.

Being an investor in the stock market always means taking on risk of loss.  Successful long-term investing decisions will come from understanding your individual relationship with loss aversion.  Some of the tools I mentioned in my last post (click here if you missed it) can help, but I’ve found that you don’t have a full appreciation for this concept until you’ve experienced a significant loss firsthand.

Loss aversion can oftentimes lead someone to be more conservative than they really should be, which hinders growth potential.  The impact of this over someone’s saving years, spanning decades, could be just as detrimental as experiencing loss.  But here’s the good news:  Being averse to loss is not always a bad trait to have.  An investor who is nearing, or in, retirement should have a sharper eye toward the risk of loss.  Over future posts, I will dive into why protecting from losses is so important to retirement success.

Next time:  Math is not Money…